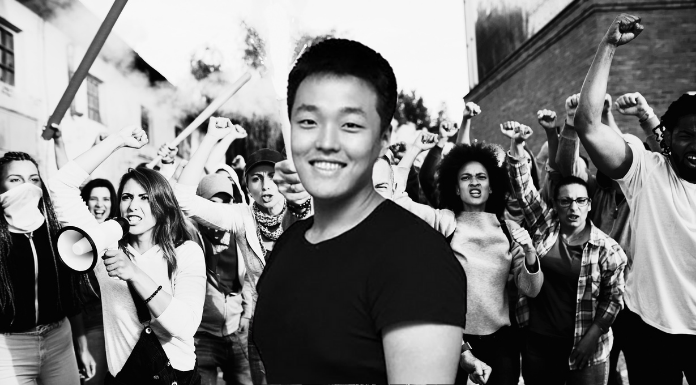 Here’s The Latest On The Terra UST Saga

The Terra UST saga is the definition of a developing story. Keep checking back here for updates as they come.

Just a week ago, Terra’s LUNA token was almost on the top of the world (9th) in terms of market cap with its stablecoin UST (10th) right by its side.

This week isn’t going so well. The Terra token and Terra UST both find themselves outside of the top 50, with LUNA 55th and UST 58th. Namely, Luna’s market cap has fallen to 1.3 billion USD from an almost 22 billion just last week.

Making matters worse is the fact that the LUNA token is designed to keep UST’s peg. The longer UST is off its peg the more LUNA is minted and sold off. Conceived as a metaphor for the earth and the moon, LUNA and UST’s working relationship is closer to that of twins. That is if as an adult, one of the twins needed to absorb the other to stay alive.

As today’s fork governance proposal describes it, there is no plan for a burning mechanism. Instead, the chain will usher on in its forked form. The idea being that without UST, you won’t need a built burning mechanism. But the question remains, what exactly is the point then? Maybe the twin metaphor doesn’t work as well as I thought. There would be no earth without a moon. Should there be a LUNA?

LFG Foundation Revealed How Much Bitcoin It Has Left

Luna Foundation Guard (a.k.a. LFG) revealed that it still has 313 bitcoin (worth almost 10 million USD at its current price. This is after having had 71,000 BTC at one point (over 2 billion USD).

LFG revealed what was left in their reserves after reports surfaced (scroll down to read more about the report) that billions of LFG’s bitcoin was unaccounted for. As crypto forensics firm Elliptic pointed out its difficult to ascertain exactly what happened to the Bitcoin after it left the wallet for crypto exchanges. The foundation behind Terra’s ecosystem posted a somewhat of a detailed breakdown of their transactions.

LFG says the remaining Bitcoin will be used to pay back investors. No timeline was provided, or what mechanism will be used to do so. The foundation also currently still has the following in their reserves:

Luna Foundation Guard’s (a.k.a. LFG) Bitcoin apparently ended up at two exchanges, Gemini and Binance. According to crypto analytics firm, Elliptic, “As the UST stablecoin’s value has continued to plummet, questions have been asked about the fate of the LFG bitcoin reserve, and whether it was really used to support the stablecoin’s value.”

The reason, as Elliptic points out, is that centralized exchanges are like “black boxes,” meaning, you don’t recover anything until something bad happens. In this case, something bad did happen.

Centralised exchanges are usually black boxes when it comes to blockchain analytics, however law enforcement investigators can obtain information from these businesses in some circumstances, allowing them to follow the funds further.

As the analytics firm points out — kind of ominously — investigators can obtain information from these businesses.

As you’ll recall from our earlier update, CZ (a.k.a. the CEO of Binance) was asking out loud where all the Bitcoin went. Sure seems like he could figure out pretty easily where the Bitcoin on his exchange went to. It’s very interesting that he decided to throw that out there.

Recommended: What is Tether?

CZ’s Thoughts On If A Fork Could Work

This won't work.
– forking does not give the new fork any value. That's wishful thinking.
– one cannot void all transactions after an old snapshot, both on-chain and off-chain (exchanges).

Where is all the BTC that was supposed to be used as reserves? https://t.co/9pvLOTlCYf

As CZ points out a new fork doesn’t create new value. It’s just essentially a geeky way to say rebrand. Though in this case, it’s a rebrand/obfuscation. Think of it as a non-violent version of Blackwater rebranding to Academi.

Perhaps a rebrand encourages some greater fools that bagholders can sell too, but it doesn’t really make the community whole by way of the perpetrators of its demise. As CZ points out, rather astutely, “where is all that BTC that was supposed to be used as reserves?”

A look inside the BTC wallet shows it’s currently worth $0 USD. It once had 70,000 bitcoin, which currently would be worth over 2 billion USD. That’s even after the big BTC dip.

“Shouldn’t those BTC be ALL used to buy back UST first?,” CZ added.

What’s Going On With The Washington Nationals?

So MLB team Washington Nationals were caught tweeting out Terra-sponsored content while the fiasco was just beginning. They have since stayed mum on the whole thing hoping it will go away.

Interestingly, they still have Terra signage up their park. I suppose it’s as they say, make your bed, you sleep in it.

It's been roughly four days since $UST first depegged, but Terra's still a major sponsor at Nationals Park😳

Hopefully they paid it forward, and contract entitles them to visibility for entire season.

Maybe Do Kwon can use what's left of BTC reserves to pay the next invoice😂 pic.twitter.com/OCoYxF3vOq

Even without a formal announcement, it’s safe to say the agreement is on the rocks. If for no other reason, wouldn’t Terra want their signage to reflect the name of their fork? JK. It remains to be seen what the Nationals do about this, but I imagine they are working through it with their lawyers.

The original deal was for sponsorship rights for the Nationals VIP club that would run 5 five years. Considering Terra fell apart in less than five days, it’s unlikely they are going to make it through the deal. Considering their reluctance to take the signage down, one has to wonder how that 40 million dollars was delivered…

The Nationals are currently one of the worst teams in baseball, and are sitting in last place in the NL East.

Maybe legal team can be assessing contract. I’m sure Nationals don’t currently want the exposure either

It should be noted that this isn’t the worst MLB related sponsorship in history.

How Do Kwon Used To Chirp Himself On Twitter

My guy was talking shit… to himself pic.twitter.com/uuDHJ8JgHs

As it was revealed earlier this week, Do Kwon was a part of the failed algorithmic stablecoin BasisCash. He had held his work on the project secret up until this week when Terra colleagues revealed the secret.

It’s not surprising to see that Do Kwon was a part of BasisCash, considering it shared similarities to UST in the fact that it was a “decentralized” algo stable. What is surprising, though, is that not did Do Kwon not reveal his work on the project, he also publicly criticized it.

As the above unearthed tweet reveals, Do Know was positing Terra as being the king of the algo-based stables, on the basis it was better than his failed BasisCash. You can’t make this stuff up. Kwon is crypto’s Elizabeth Holmes.

Terra founder Do Kwon posted a so-called “revival plan” for the Terra Luna ecosystem. The plan though isn’t so much a plan as it is a proposal because it’s ultimately up to the community to decide how a possible fork of Terra will look like. And more importantly, who’s made whole—or at least whole-ish.

Nevertheless, Do Kwon gave his “perspective on how this should be done,” adding “While UST has been the central narrative of Terra’s growth story over the last year, the Terra ecosystem and its community is what is worth preserving.”

This means essentially remaining holders of LUNA and UST would become debt holders so they would become automatic owners of a forked LUNA.

“UST holders need to own a large share of the network, as the network’s debt holders they deserve to be compensated for the tokens they have been holding to the end, “ Kwon said.

Remains to be seen how kindly Kwon’s plan but actually proposal will be welcomed by what’s left of Terra’s community.

Crypto.com continues to bravely favor its fortune — and paying for Matt Damon commercials. Just weeks after announcing it’s cutting its customer’s membership rewards, the fledgling exchange is now reversing trades after they quoted “an incorrect price.”

“All impacted trades (buy and sell) will be reversed, and affected users will be credited USD $10 in CRO for the inconvenience caused,” Crypto.com said. No word yet if the exchange will offer a lousy t-shirt to go along with the $10 dollar CRO credit.

On another note, Crypto.com did announce that withdrawals of LUNA have resumed after being halted yesterday.

Terra (ticker symbol: LUNA) blocks have resumed mining after having been shut down for the second time. The first shutdown resulted in a quick uptick. LUNA was trading below a penny ($0.008) before the announcement, but then shot up as high as 4 pennies ($0.04) after Terra resumed block production.

However, the positive price action was short-lived. The former DeFi powerhouse, and home to the fastest-growing stablecoin in the space, fell to a new all-time low of 0.00000099 — a.k.a way less than a penny.

LUNA has since “recovered” and is now trading around $0.00001811 range, as of press time (10am EST). That price is subject to change pretty rapidly, as you might have noticed.

Recommended: Week of Crypto Woes — What Did We Learn and What Now?

The other day Binance warned it would delist LUNA if it were to fall below $0.005. Shortly after, Terra halted its block production, which shot the coin up above that level. However, it fell swiftly to far below Binance’s threshold. True to their word, Binance delisted the coin, as well as several futures-related contracts. Binance also delisted UST. (NOTE: since publication, Binance announce it will resume trading LUNA)

Meanwhile, FTX, Kucoin, and Gate.IO have decided to keep trading for both LUNA and UST going. Gate.IO reported 84 million in volume thanks to their trading of the volatile (in the bad way) cryptocurrencies.

According to credible Korean news site Money Today, Do @stablekwon requested to police for emergency protection as investors have been visiting his house.
https://t.co/3rUsjUBGCp

There are reports floating around saying Do Kwon and his wife have asked for increased police protection. Suffice it to say, s**t got real. Scrolling through the Twitter comments is interesting to say the least. It’s understandable to be mad, but to threaten violence over an investment you made out of your own volition? Hard to square that.

Check back for updates as more news trickles in on the Terra UST Saga, because you bet your bottom dollar it will.

Recommended: The Bob Ross Approach To Investing In Crypto

ADA Soars To All-Time High Ahead Of Smart Contracts