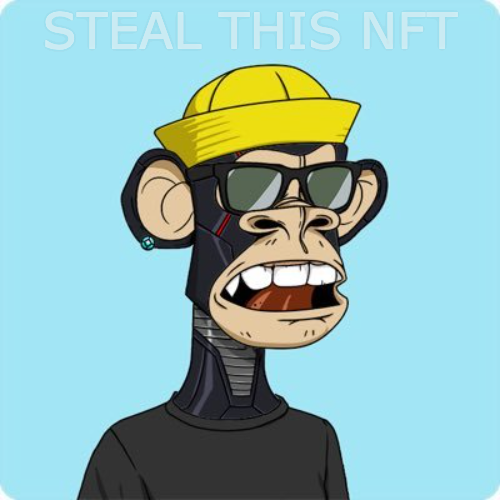 Should you have the right to steal an NFT that you could just right-click and save to your desktop? And, what does that say about the current state of decentralization and the blockchain?

On Saturday night, Calvin Becerra, the owner of several Bored Ape Yacht Club NFTs, asked some would-be buyers he met on Discord to help him with an issue with one of the NFTs. “Guys posing as buyers in discord were helping me trouble shoot a problem we thought was happening. They walked me through language settings in my MetaMask and had me chose an option…,” Becerra wrote on Twitter. Sounds innocent enough, right? What could possibly go wrong with giving strangers access to your MetaMask?

Suffice it to say, Becerra, who bills himself as a motivational speaker, high-performance coach, and entrepreneur, was robbed of his Apes — he claimed he was “hacked.” Rather than throw his hands up and accept that he had been had, Becerra took to Twitter. A day later he managed to get the attention of the biggest NFT marketplaces (OpenSea, Rarible, NFTrader) and had his stolen apes delisted, rendering the JPEGs worthless.

The Cynical Kind Of NFT Hate

He sounds ready to pay a ransom for his "stolen" NFTs. Astonishing. pic.twitter.com/IDlz1dKzwG

Trending
What Is Pavia?

Of course, Becerra’s move was rightfully met with mockery. Most of it falling somewhere between “decentralization or bust” or “haha NFTs are just jpegs loser”. A glib example of the latter comes from New Republic staffer Jacob Silverman: “He [Becerra] sounds ready to pay a ransom for his “stolen” NFTs. Astonishing.” Yes, Becerra doesn’t come off well here, but neither does someone who self-seriously uses the word “astonishing.”

Others in that crowd actually want to have an adult conversation about NFTs instead of just cynically mocking the space. And, yes, I know how ridiculous the words adult and NFTs sound together.

ARS Technica founder Jon Stokes wrote via Twitter, “…if dude can appeal to @BoredApeYC to unilaterally declare a stolen ape “officially worthless,” doesn’t that kinda give the (supposedly decentralized) game away?”

Stokes added, “Not trolling, b/c I think there’s something here interesting & worth thinking about: isn’t “we all agree to essentially delegate the granting or denial of legitimacy (= affects mkt value of assets) to a central authority” essentially what we already have?”

Seems like the right analogy is not with the Fed (which doesn't single out transactions for nullification) but with federal police power using coercion to repossess assets in particular cases for violations outside the basis of the currency. & this actually more like a boycott

That’s a good question. Is the blockchain giving us something different than what we have already?

Sure, we can already point to examples like this Bored Ape fiasco or how a mystery exchange blocked a withdrawal from some hackers as examples of the new world being just like the old one. But I think most of us would agree that stealing things, or threatening to sabotage outdated IT, is not chill. Thus, most of us are fine with a central authority imposing its will (within reason) in those cases.

The problem is with the other ways that a central authority imposes its will. For example, speaking out against the powers that be. So far, we have some examples of the blockchain helping in that regard. I’d say that’s different, for one. If the prevailing system was like blockchain, would there be as many whistleblowers on the lam?

The question then becomes who decides what’s good or bad? I know it’s murky territory, but until we start running into issues like chokepoints on decentralized exchanges, I don’t think the inability to sell stolen Bored Ape Yacht Club NFTs is a sign that we should give up on the blockchain.

Cardano Summit 2021: Did It Shut Up The Critics?

Three Top Projects On Avalanche You Have To Check Out